Sitting in Rutherford Hall and glancing at the seal hanging behind the dais we thought, "Haven't we seen that Indian* before?"

Scarsdale's official seal goes back to the first days of the Village of Scarsdale. Frank Bethell presented the seal to the Board of Trustees at its very first meeting in 1915. However, the honor of creation goes to Maitland de Gogorza, then an artist in the advertising department of the NY Telephone Company, where Frank Bethell was a vice-president. 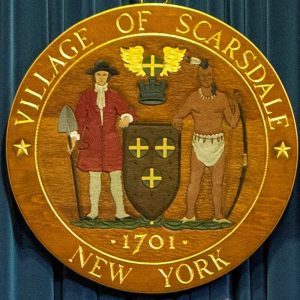 The new seal of the City of New York had been issued that very same year, and Mr. de Gogorza adapted it for Scardale's use. Yes, Scarsdale's seal appropriated New York City's 'Indian'. The American Indian was Mr. de Gogorza's nod to this having first been their territory. (This corrects our impression that the seal portrays some fanciful partnership between settlers and American Indians - it does not.) 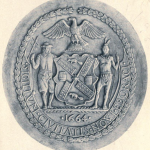 Mr. de Gogorza substituted a farmer for the sailor used in New York City's crest, since Scarsdale started as a farming community. Reference for farmer dress was taken from Elizabeth McClellan's book "Historical Dress in America". This is probably the book plate from which the farmer image was adapted. 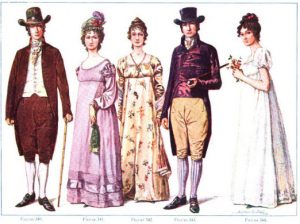 The center of Scarsdale's seal was to feature Caleb Heathcote's family seal. For this, Mr. de Gogorza referenced several American works. This plate shows one of the references, which includes Caleb Heathcote in poofie hairdo glory along with his family seal. You can click the image for more detailed inspection and see that the seal of the Village of Scarsdale incorporates the Heathcote three-cross pattern on a shield without any significant changes. 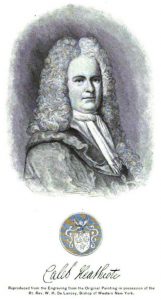 The crest above the shield was taken from another source, "America heraldica". According to de Gogorza, the crown is "...usually awarded to one who first scaled an enemy fortification and placed a flag there". (We thought it signified Scarsdale's main industry: real estate.) The outstretched wings and crown correspond very well to the crest in Scarsdale's seal. 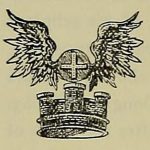 In borrowing New York City's seal, Mr. de Gogorza perhaps inadvertently aligned Scarsdale's seal with that of the actual Barons of Scarsdale, England. While the Heathcote family crest has no figures, the arms of the Barons of Scarsdale has two on either side, with a farmer and American Indian substituted for ladies "Just" and "Mildly" (Recte et Suaviter). 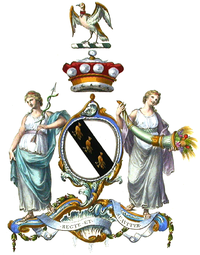 Arms of the Barons Scarsdale

The original seal has all these years been hiding in plain sight, hanging on a wall in the Village Clerk's office. Click the image and you can see wonderful details, along with de Gogorza's signature at lower left.

If you would like to learn more about Mr. de Gogorza and other interesting sources that went into this feature, check out the extensive notes further below.

But first - the Village of Scarsdale's seal has been around for over 100 years. A lot has changed. Scarsdale doesn't have a flag except perhaps for its seal on a white background, but what might a flag of Scarsdale look like? 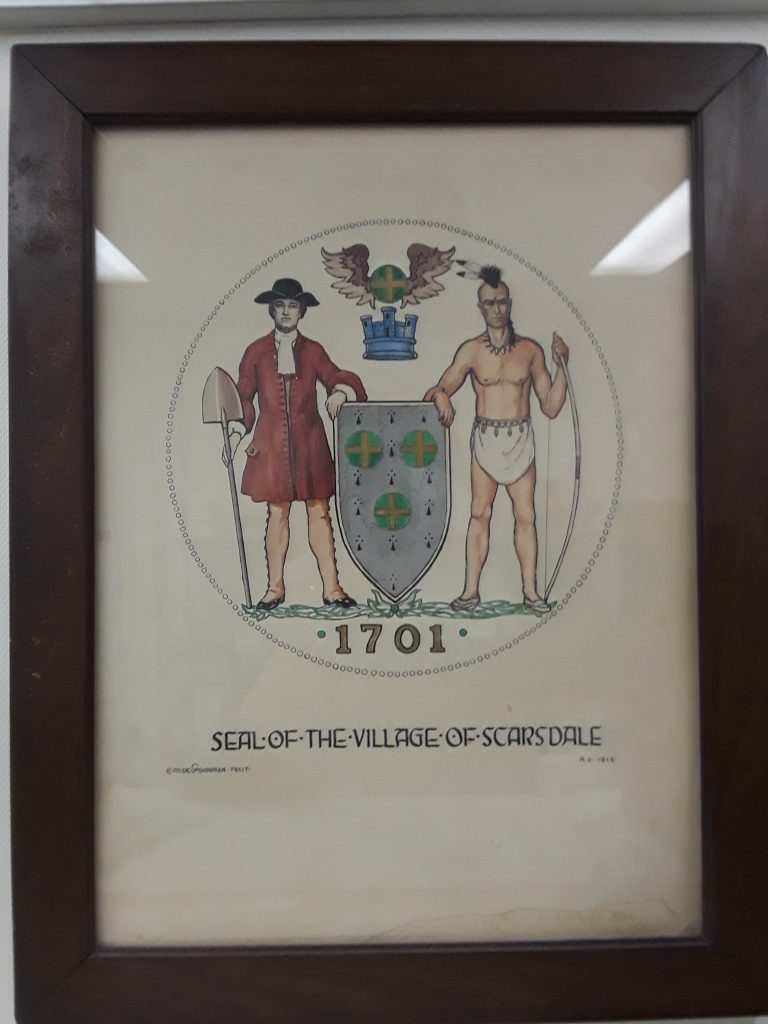 * We've intentionally used 'American Indian' or 'Indian' rather than 'Native American' because the latter term remains controversial among those it is being used to describe. Further reading.

Village staff provided us with the official history of the seal. There may be more lurking in Village Hall that given the opportunity, we shall attempt to lay our eyes upon. For obvious reasons, let us all pray that is soon.

The Scarsdale seal shown at top is hanging behind the dais at Rutherford Hall.

An even more complete history of the seal came from "About Scarfdale" (spelling intentional) by Richard Lederer, the renowned former Village Historian of Scarsdale. Thank you, Dara, for reminding me of this pamphlet and sending the relevant pages!

The 1915 seal of the City of New York was the latest revision in a format extending back to the establishment of its charter in 1686. It is reproduced within a fascinating document, "Seal and Flag of the City of New York" The new seal was created by sculptor Paul Manship who would go on to create Rockefeller Center's beloved sculpture Prometheus.

Elizabeth McClellan's book "Historical Dress in America" is a splendid two volume work that must surely be one of the great references for how the new Americans dressed over more than two hundred years of their early history. It is now available online.

The Caleb Heathcote plate is from "History of Westchester County: New York, Including Morrisania, Kings Bridge, and West Farms, which Have Been Annexed to New York City". United States: L. E. Preston & Company, 1886.

The Heathcote crown and crest is from "America heraldica : a compilation of coats of arms, crests and mottoes of prominent American families settled in this country before 1800" by Rykers and Vermont, New York: Brentano Brothers, 1887.

Arms of the Barons Scarsdale from Wikipedia

The picture of the original sketch of Scarsdale's Seal was provided to me by Donna Conkling.

The notional 'Scarsdale Flag' was created by Miles Fischman.

Maitland de Gogorza went on to become an Assistant Art Professor at Smith College. His work resides in various collections and really is wonderful. de Gogorza's obituary was published in the New York Times on June 22, 1941. Born in Asbury Park, he attended the Ethical Culture school in NYC and then studied at Pratt and the Art Students League. He served as a medic with the American Expeditionary Forces during World War 1. After the armistice, he studied art in Paris with a group of men selected from the American forces. Here is an example of his work, a landscape not unlike what Scarsdale may once have looked like: 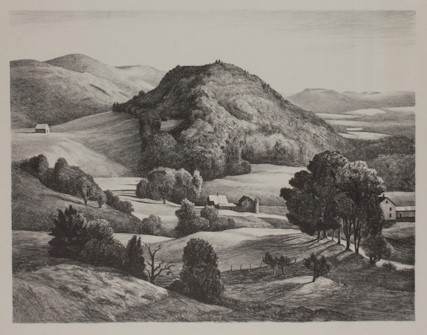